홈 > 업계 정보 > Semiconductor Billboard: Nvidia and TSMC are proud of Huawei's inclusion in the list?

Semiconductor Billboard: Nvidia and TSMC are proud of Huawei's inclusion in the list? 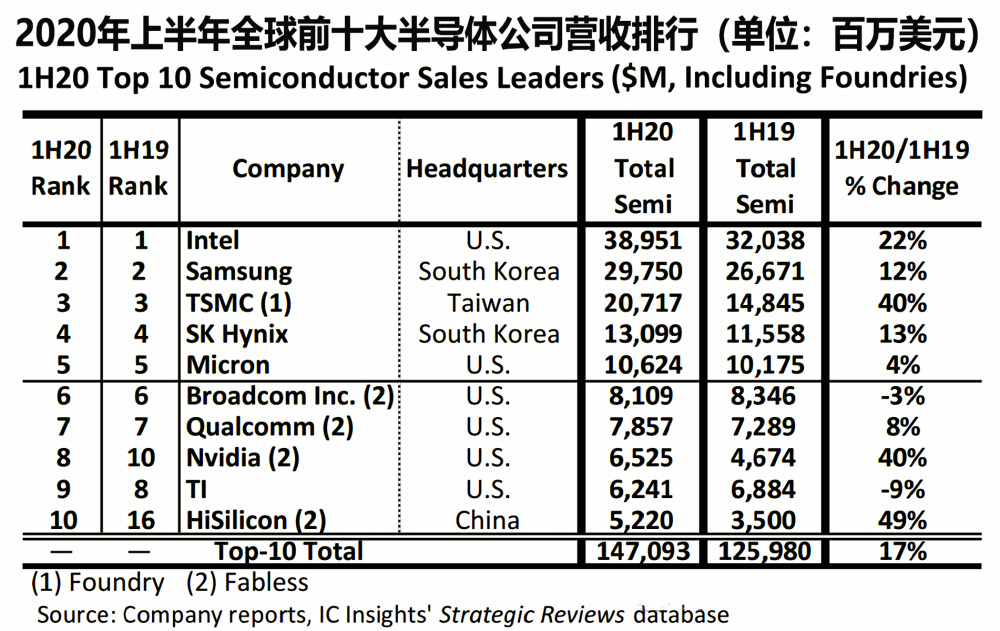 According to the latest report of IC Insights, it can be found that although there was an unpredictable black swan event in the world in the first half of this year, the Sino-US trade conflict has further intensified, but in the semiconductor industry, it is found that the entire industry is still showing positive growth, compared to 2019 , A year-on-year growth of 17% in 2020, which is more than three times the total growth rate (5%) of the global semiconductor industry.

It can be found from the IC Insights list that the ranking of the top seven vendors has basically not changed. Intel still dominates the top position, which benefits from the good market. Intel said that due to the epidemic, millions of people were forced to work from home, stimulating demand for computing power. In the first quarter, its data center business sales increased by 43% to 7 billion U.S. dollars. There was already a growth trend before the crisis.

However, Intel’s situation has changed recently. Intel’s 7nm process processor has been delayed by 6 months from its target release time. For this reason, Intel’s CEO Bob Swan had to say to the public that a “contingency plan” was needed. Part of the high-end chip manufacturing business is outsourced, and the object of outsourcing is TSMC.

Intel is a rare IDM company in the chip industry. It includes chip design, manufacturing, packaging and testing. When every Intel CEO takes the stage, he will release this message: Only by holding the most advanced manufacturing process in his hand can he do it. The best processor.

Today, the 50-year tradition of Intel’s persistence has been broken, and the impact on Intel is very obvious. On the second day of the announcement, the stock price plummeted 18%. And its competitor AMD shares rose 16%, TSMC rose more than 9%. Intel in the first half of the year was very moist, but in the second half of the year, it was full of crises, and its top position was at stake.

Compared with Intel, TSMC, which undertakes chip outsourcing, has made rapid progress in performance. In the first half of 2020, its revenue increased by 40% year-on-year. From the sales performance in the second quarter, net profit reached 28.67 billion yuan, a record high in 6 years. In terms of market value, TSMC (400 billion US dollars) is twice Intel (200 billion US dollars).

This year’s TSMC can be described as proud. As the world’s largest foundry, TSMC, which holds 7nm and 5nm process technology, naturally has no shortage of customers. Qualcomm, Apple, Nvidia, AMD, Intel, and even Tesla recently, Both place their orders to TSMC.

However, it is not all good news. Due to the suppression of the United States, TSMC had to abandon Huawei’s order. As TSMC’s second largest customer, it contributed 14% of TSMC’s revenue. However, after September, it will not be able to do so. Huawei OEM produces chips.

It is true that the loss of Huawei’s order is undoubtedly a loss for TSMC, but TSMC, which masters core technology, does not lack customers. Manufacturers such as Nvidia, Qualcomm, and Apple have announced that they will increase chip investment to fill the gap after Huawei’s withdrawal. Not to mention that Intel, Tesla and other companies have recently issued large chip orders to TSMC.

In the second half of this year, if nothing happens, TSMC will continue to maintain rapid growth and develop rapidly, driven by 5G, the Internet of Things and artificial intelligence. What TSMC needs to do is to maintain the leading level in the chip manufacturing industry.

Another eye-catching feature is Nvidia, whose revenue in the first half of the year increased by 40% year-on-year. According to the financial report, Nvidia’s revenue in the second quarter reached US$3.87 billion, a year-on-year increase of 50% year-on-year and a quarter-on-quarter increase of 26%. Since the beginning of this year, NVIDIA’s stock price has increased by more than 100%, and its current market value has exceeded 300 billion US dollars. It is currently the largest semiconductor company in the United States.

The growth logic of Nvidia’s business is similar to that of Intel. Due to the impact of the epidemic, many regions have to work at home. The demand for remote office and online entertainment has soared. At the same time, due to the rapid development of the cloud computing industry, the demand for data centers is also Increasing day by day.

However, Intel’s surge in revenue this time is closely related to the surge in PC-side business demand, and the PC-side demand growth is due to the epidemic. From the perspective of the game business alone, mobile games are an inevitable demand in the future, and the demand for PC games only picks up for a short time, and the future will inevitably return to normal.

However, judging from Nvidia's second-quarter financial report, it is clear that they have realized this problem, and overweight data centers have become Nvidia's current development direction. The recently released A100 graphics card has not only reached 7nm in the process, but the AI training speed has also been increased by 20 times.

At present, NVIDIA has cooperated with major cloud computing companies such as Amazon and Google, and there are even rumors in the market that NVIDIA has conducted in-depth negotiations on the acquisition of Arm, and completed the acquisition of network hardware equipment supplier Mellanox for US$6.9 billion in April this year. It is all proving that Nvidia, which has missed its mobile phone, is making rapid progress towards diversification. At present, with the blessing of 5G and AI, a healthier and stronger NVIDIA is growing rapidly.

The biggest bright spot in the list is Huawei HiSilicon. HiSilicon replaced Infineon and became a new entrant in the Top 10 in the first half of the year. This is also the first Chinese mainland semiconductor company to enter the global top 10. As a semiconductor design company under Huawei, more than 90% of HiSilicon’s sales came from Huawei’s orders. In the first half of the year, its operating income surged 49% year-on-year. 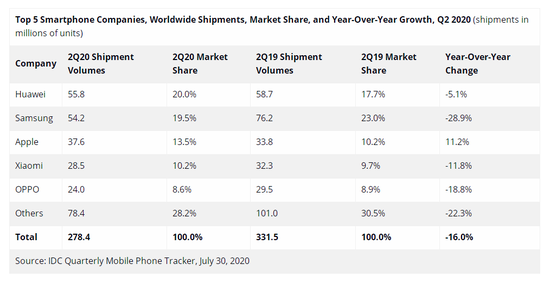 In the first half of this year, Huawei HiSilicon was in high spirits. According to a report from the analysis agency CINNO Research, Huawei HiSilicon’s market share in China’s smartphone processor market reached 43.9% in the first quarter, surpassing Qualcomm for the first time. According to statistics, HiSilicon shipped 22.21 million mobile phone processors in the first quarter of 2020, basically the same as in 2019. Due to the impact of the epidemic, various smartphones have experienced different degrees of decline. Apart from Apple still being able to maintain positive growth, only Huawei has the smallest decline. The rapid growth of smart phones has brought a strong boost to HiSilicon. In the second quarter of this year, Huawei won the crown of the global mobile phone sales rankings. 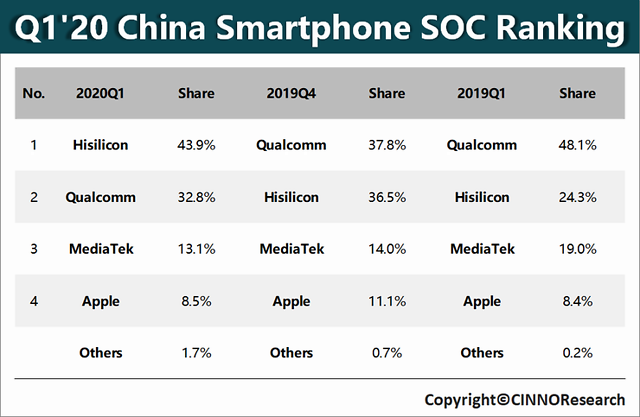 However, in May, because the United States stipulated that all manufacturers that used American technology and equipment were prohibited from supplying Huawei, TSMC was forced to abandon Huawei's order. Huawei's consumer business CEO Yu Chengdong even publicly stated that the Kirin 9000 may be the last Kirin chip.

As a chip design manufacturer, HiSilicon’s chip production is basically handed over to TSMC’s foundry. Today, TSMC is unable to produce for Huawei. Samsung and SMIC have also expressed their inability to produce, and Kirin chips can only become an absolute success.

On August 17, the US ban on Huawei was escalated again. 38 Huawei subsidiaries in 21 countries were included in the sanctions list, requiring suppliers that use US technology not to sell to Huawei without special permission. Chips manufactured by American technology not only means that HiSilicon cannot place chip manufacturing orders to foundries, but also means that Huawei cannot maintain its mobile phone business by purchasing external chips.

Faced with such a predicament, Huawei will not sit back and die. It is reported that Huawei has reported internally the "Tarshan Project" to build its own semiconductor production line without American equipment. The priority currently being built is a 45nm chip production line, which will be further explored to 28nm in the future.

However, as soon as the news came out, Huawei urgently refuted the rumors, saying that the "Tashan Project" was a fiction. Regardless of whether the news is true or not, it at least proves that people still have expectations for Huawei.

But as the saying goes, good fortune comes, misfortune never comes singly. Recently, according to Digitimes reports, due to the further escalation of US sanctions on Huawei, a large number of engineers in the HiSilicon Taiwan team are being forced to leave. This situation is undoubtedly worse for the current HiSilicon.

Of course, Huawei is not completely without good news. Although in the second half of the year, especially after September 15th, HiSilicon Kirin chips will no longer be produced, which will deal a huge blow to Huawei's mobile phone business. But in Huawei's core telecommunications equipment business, the impact is not as severe as the smartphone business.

In addition to mobile phone chips, HiSilicon also has server chips (Kunpeng), base station chips (Tiangang), baseband chips (Balong), AI chips (Shengteng), router chips (Lingxiao), etc. Take Tiangang as an example, the Tiangang chipset suitable for 5G base stations is manufactured using TSMC’s 7nm process and has been in mass production since last year. Compared with mobile phone chips, base station chipsets have a longer life cycle, higher stability and reliability. So at present, the situation is slightly better than the mobile phone.

In addition, the 193nm DUV lithography machine developed by the domestic Shanghai Microelectronics Institute can be manufactured in a 28nm process, which is sufficient to meet the production needs of non-mobile phone chips. As for mobile phone chips, mobile phones with 28nm process still exist in the market. For example, many Hundred Yuan phones are equipped with 28nm chips, which are not completely unusable.

However, in today's environment, it is very difficult for Huawei to stay on the list.

Looking at the world's major semiconductor manufacturers, there are Intel, which is turning the bow, and Nvidia, which is making a comeback, TSMC, which is proud of the spring breeze, and Hess, which is full of gold. We have also discovered some laws from this. Cloud computing and data center will become the main direction of future semiconductor manufacturers, and GPU will benefit from this. Intel is also working hard to shift in this direction. TSMC, which has mastered 5nm, is very strong and may be even stronger in the future. However, compared with other manufacturers, the factor that has the greatest impact on HiSilicon is the outside world. It is like hitting pig iron with a hammer. In the end, whether it is made into steel or scrap, it depends on HiSilicon’s own toughness. Of course, we all hope that it is former.

Finally, in the second half of this year, due to the impact of uncertainties such as the epidemic, Nvidia also slowed down its cloud expenditures. At the same time, in the data center, Microsoft, Amazon, Google and other large manufacturers currently have high inventory, which is rumored to have The demand in the third quarter was revised, and the market growth rate is expected to slow down in the third quarter. However, it is impossible for manufacturers to give up this piece of fat, so they can only walk around quickly while nervously. The semiconductor market in the second half of the year is bound to become very interesting.