홈 > 업계 정보 > The highest increase is 25%. AMD announced that it will increase the price of Xilinx FPGA. The shortage of supply will benefit TOP 2 manufacturers

The highest increase is 25%. AMD announced that it will increase the price of Xilinx FPGA. The shortage of supply will benefit TOP 2 manufacturers

Recently, AMD sent an internal letter to supply chain customers, announcing that it will increase the price of FPGA products under its Xilinx brand. In terms of price increases, the lowest is 8% and the highest is 25%. Currently, the news has been confirmed by AMD authorized distributors. 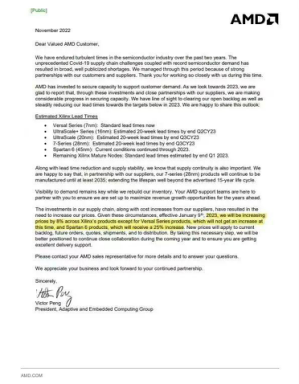 At the beginning of the third quarter, the industry has also reported that Intel has increased the price of its FPGA products, and the price increase of the older part number is 20%.

At the same time, AMD has also made adjustments in terms of delivery. The specific delivery date is changed to 20 weeks for 16nm UltraScale+ series, 20nm UltraScale series, and 28nm 7 series FPGA products, but it is expected to be Q2 or Q3 in 2023; 45nm Spartan 6 series maintains the current state, 7nm Versal series and other products maintain standard lead times.

Therefore, purely from the perspective of market share, the price increases of AMD and Intel will bring great cost pressure to equipment manufacturers.

At the same time, in the high-end FPGA market, except for AMD's Versal series, other high-end FPGAs have basically increased in price, and there are no other alternatives in the market. Of course, the price of AMD’s Versal series has always been relatively expensive in the FPGA market, basically tens of thousands of yuan, some of which can reach tens of thousands or hundreds of thousands of yuan, and the supply is also tight. Distributors The platform shows that the production cycle of these devices is 52 weeks.

Let’s talk about other high-end FPGAs. At present, the latest progress of domestic FPGA manufacturers on the 28nm node is basically small batch mass production, and the products are mainly aimed at the low-end market and low-power market of the 28nm process. Most of them are FPGAs with a gate level of about 10 million. , It is difficult to have an impact on the mid-to-high-end products of the two major companies.

28nm is a threshold for domestic FPGAs. For the market leader AMD, some of its 28nm products have been launched for more than 10 years, and there were even rumors of discontinuation of production. However, after AMD completed its acquisition of Xilinx, the company extended the life cycle of the 7 series products, including Spartan-7, Artix-7 FPGA, Zynq-7000 SoC, Kintex-7 and Virtex-7 FPGA, and will at least Extended to 2035. This has led to the fact that domestic cutting-edge FPGA products must compete with such mature products if they want to occupy the market, which is a huge challenge. Therefore, this has led to cutting-edge FPGA markets such as 5G, artificial intelligence, big data, and autonomous driving, which can only "swallow their breath" for price increases, because most devices are irreplaceable。

The FPGA demand gap is widening

Of course, whether it is AMD or Intel, the price increase of FPGA products by the two giants is not a reckless act after resource monopoly, but is driven by market factors behind it.

Looking at the demand side, according to the statistics of Susquehanna Financial Group, the delivery period of mainstream FPGAs in the market has reached the maximum value within the upper limit of 52 weeks. This author also mentioned above, the labeling of mainstream FPGA products on distributor websites , It is true that the production cycle is 52 weeks. Susquehanna analyst Chris Rolland pointed out in the report that the FPGA shortage is mainly affecting networking, optical and telecommunications equipment.

From a technical point of view, the factors behind the surge in FPGA demand are 5G and AI. If it comes to the market level, it is automobiles, data centers, 5G communications and industry. According to statistics from Frost & Sullivan, the global FPGA chip market size will be approximately US$6.86 billion in 2021, a year-on-year increase of 12.8%. Don't look at the fact that the FPGA market is not large compared to GPUs, CPUs, MCUs, etc., but this "small and beautiful" market is very important.

In terms of AI, the industry has entered a substantive stage of implementation, and edge AI has become the focus of industrial development. As the integration of AI and edge terminals becomes closer and closer, the disadvantages of ASICs begin to appear. Under normal circumstances, the number of chips needs to reach more than 100,000 pieces, so that the development of ASIC can be valuable. But in the field of edge AI, most markets cannot reach this chip usage. This part of the demand has basically turned to FPGA. By programming FPGA, FPGA can perform any logic function that ASIC can perform, and there is no need to wait for the chip tape-out cycle of three months to one year.

At the same time, in a wide range of industrial fields, due to its flexible interface and programmable features, FPGA solves the complex needs of industrial AI for various interfaces such as CAN, PCIe, and JESD204, and improves the flexibility of industrial production. In the field of the Internet of Things, the concept of AIoT also brings a lot of FPGA demand.

Therefore, the definition of FPGA in the past industry is actually too narrow, resulting in the potential of FPGA cannot be fully released. Driven by 5G and AI, FPGA has ushered in a good era of rising volume and price. According to research data from Frost & Sullivan, it is estimated that by 2025, the global FPGA market will reach US$12.58 billion, nearly doubling compared to 2021.

The above are the confidence and reasons for AMD and Intel to raise prices.

As a programmable logic device, the capabilities of FPGA are increasingly recognized in the era of software-defined hardware, and gradually move towards more terminals. In this process, AMD and Intel currently hold the absolute right to speak. Even in the domestic market, domestic FPGAs basically do not pose too much threat to the two companies at present, because these two companies mainly focus on the high-end market.

To challenge the market leader, domestic FPGA manufacturers still have a long way to go. FPGA not only has challenges in device design, but also troubles in talent. Many people describe it as the most difficult track for domestic chips, but it is not It doesn't make sense.